Paleo soups are my favorite recipes. They are so layered with flavors due to seasonal veggies and fresh herbs. Soups are wonderful bowls of love…some are silky, some are creamy, some are hearty…but most all are flavorful and they bring back feelings of comfort. Maybe it is because our moms or grandmothers made us a bowl when we were sick…OK, that was sexist as I’m sure some dads out there helped cure their kidlets with a warm bowl of love also.

Below is a list of 20 paleo recipes that I found around town. I think it is a diverse grouping representing many cultures, flavors, and ideas. My favorite way to enjoy soup is the next day. The flavors just marry together overnight ~ I have never made a soup recipe that has proven this theory wrong!

Here is my history with soups. My mom is a great cook if given a recipe. The problem is that she hates being in the kitchen, but when forced, she can follow a recipe like a champ! Growing up, I thought Campbell’s Cream of Mushroom, Cream of Tomato, and Bean and Bacon were the way to go…and she served it up with the best grilled cheese sandwich in town. My heart still longs for this meal when I’m around “my mommy”. Each Christmas my mee-maw would make fresh Corn Chowder and Brunswick Stew (made with venison that my uncle shot). These soups had crazy, yummy flavor…it was our once-a-year treat. Sooo good.

When I started transitioning over to paleo, I began cooking a whole chicken once a week and making my own broth afterwards. Wow ~ what a difference the flavor makes when it is homemade. My hubby, Sam, had always told me that he hated soups; however, as I started experimenting with different recipes, he would exclaim, “Man, I hate soup, but this is good!”. After the fifth recipe, I said, “Babe, I think you like soup ~ LOL!”. So, now I make a soup/stew once a week after my week prep of cooking a whole chicken (on a side note, there is so much you can do with this chicken meat).

Silky Gingered Zucchini Soup by The Clothes Make the Girl

Fish Tea by Jamaican It Paleo

Rustic and Bacon Pumpkin Soup by The Paleo Mom

Garlic Kale Soup with a Poached Egg by Cavegirl Cuisine 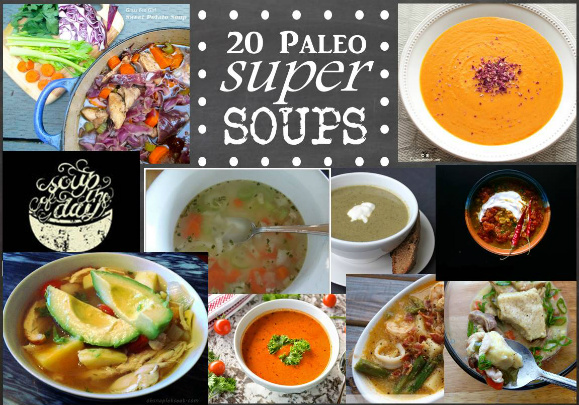