MUSHROOM RECIPES!  I suppose you either love ’em or hate ’em. They are either these earthy bits of wonderfulness that add everything to the dish or they are just a spore-bearing fungus that is icky on your plate!  I am of the former camp ~ LOVE THEM!

My most spectacular memory of mushrooms are actually from a truffle night in Paris (truffles are underground mushrooms). My hubby and I we were stationed in Germany right after our marriage.  A year later, we paid $200 for a bus trip to Paris that happened to coincide with our 1-year anniversary. Being a Navy brat, I had already been to Paris so I talked Sam (hubs) into skipping the whole tour thing.  The 200 dollars basically bought us the transportation there and back as well as lodging in a nice hotel. We walked the Avenue des Champs–Élysées at night and climbed the Arc de Triomphe. I had never seen it at night…amazing. The Parisian night traffic was beautiful. Ahhh…what a night.  Oh wait, were we talking about mushrooms?  LOL! Well, we found this little restaurant. They were offering a 5-course meal of truffles for two.  It was way too expensive. So I talked Sam into ordering it rationalizing that it was our anniversary and we were in Paris and so on. I wish I could conjure up in my mind everything we ate, but this was before Instagram and camera phones. I wish I was such a foodie at that point in my life where I remembered every last morsel of my food.  But, all I know is that each bite melted in my mouth…that I was across from the love of my life…and that feeling of being so in love in Paris while drinking wine and eating mushrooms.

So, here is my round-up.  Some of these recipes use mushrooms as the star of the dish and some just include it.  Whether the star or not, I think you’ll enjoy this eclectic grouping of mushroom recipes…enjoy!!

Cream of Mushroom Soup by My Heart Beets

Italian Beef Hash with Mashed Cauliflower by Paleo in PDX

Stuffed Mushrooms with Herbed “Cheese” by The Savory Lotus

Italian Stuffed Leg of Lamb Roast by Gutsy by Nature 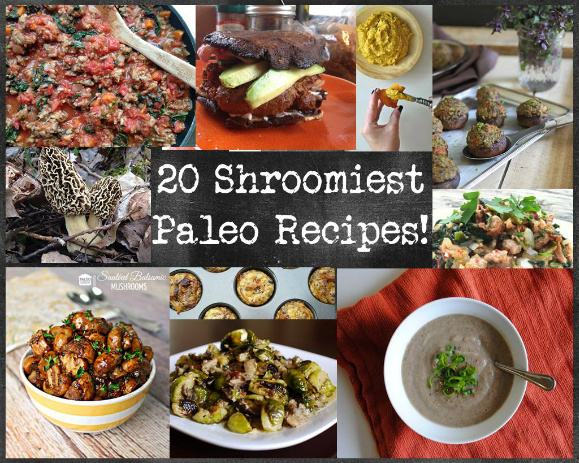