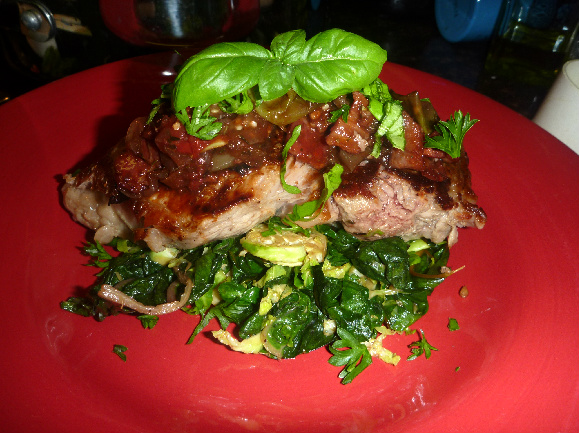 Tomatillo Bacon Compote:
Line a large baking sheet with foil, arrange bacon slices on the foil (I baked the whole package of bacon to have left overs – you’ll only need 5 slices though) and place the baking sheet on the center rack of a cold oven. Close oven door and turn on oven to 400 degrees F.  Allow oven to slowly come up to temperature and leave bacon in oven for approximately 20-25 min – until bacon is crisp and golden brown.
While bacon is cooking, line another small baking sheet with foil. Slice tomatillos in half down center and place flat side down on foil.  When bacon is done, remove, and switch oven to BROIL.  Place bacon strips on to paper towel lined plate to cool and pour bacon grease from baking sheet into a heat resistant container – you’ll need this!
Place tomatillos under broiler for approximately 3-5 min until skin starts to blacken and blister, then remove from oven and set aside.
In a large sauce pan sauté the onion in the 4tbs of the rendered bacon grease and 2 tbs of maple syrup over medium heat until they begin to caramelize.  While this is cooking, take 10 of the halved tomatillos and chop into ½ inch pieces along with the ½  of  tomato.  Add these to the onion mixture with 2 cloves of minced garlic and sauté approximately 6 minutes.  Next, coarsely chop 5 strips of the baked bacon and add to mixture along with the dried thyme, dried basil, ½ cup of balsamic vinegar, and ½ cup of Cabernet, and dash of ground pepper.  Simmer over medium heat until mixture is reduced and becomes a thick sauce-like consistency.  Turn off heat, and set aside.

Top Sirloin:
In a large metal skillet, heat 2tbs of bacon grease (or 2tbs of olive oil) over medium high heat.
While oil is heating, liberally salt and pepper each side of the sirloin.  Sear each steak for approximately 4-6 min on each side.  When cooked to liking, remove steaks and set aside to rest.
Garlic Butter Rainbow Chard and Brussels Sprouts:
In the same skillet that the sirloin was cooked add ½ cup of beef broth and 2 tbs of butter, and 3 minced cloves of garlic – deglaze the pan, scraping all the brown bits of the bottom of the pan. Bring to a boil and cook until reduced by half. Reduce to medium heat and add in Rainbow Chard and shredded Brussels sprouts. Cook until chard is wilted and Brussels sprouts are tender – about 5-6 minutes.

To Serve:
Place about a cup of chard and Brussels sprouts down on plate first, add one steak on top of the veggies and then place the bacon compote on top of steak.  Top off fresh chopped parsley and basil!