This Paleo Colcannon will have you dancing a jig by the end of the meal, especially if you are listening the Colcannon song:

“Did you ever eat Colcannon, made from lovely pickled cream?
With the greens and scallions mingled like a picture in a dream.
Did you ever make a hole on top to hold the melting flake
Of the creamy, flavoured butter that your mother used to make?…”

Colcannon is a traditional Irish dish consisting of mashed potatoes. I have subbed a combination of parsnips and turnips in this recipe to make it paleo friendly. I added an onion; however, feel free to add leeks, scallions, or the like. Kale can be used instead of cabbage. And bacon is always yummy instead of ham. Just like stews in the American South, there are regional differences in this inexpensive meal so feel free to tailor it to your liking.

Also, it is traditional to make a little indention in the Colcannon (see the last 2 lines of the song above) in each bowl and add a little melted butter (or ghee), but feel free to eliminate this step if it is just too much for you. 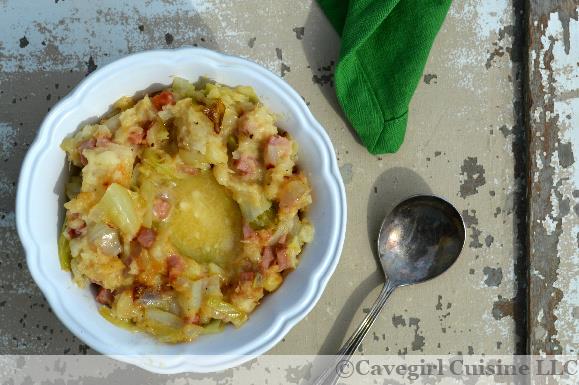