I was born a Georgia gal, so any venison I’ve ever tried was in the magical Brunswick Stew that my Mee-Maw used to make every Christmas with the meat that my Uncle Phil had hunted.  Other than that, I was also a Navy brat, so we were all over the world and deer meat never really played a part in my everyday world.

We now live in Louisville, KY.  One of my friends is also a hunter and he recently gave me some deer meat.  I was so excited at first, but then I put it in the freezer, not sure what to do with it.  So, I finally put the ground venison in the refrigerator last night to defrost.  It was time to make a new recipe.  I generally lean towards Italian seasonings (as we lived in Naples, Italy my first two years of high school and I love these flavors).  However, I wanted to make a dipping sauce and I know that a lot of curries generally have a cooling Raita alongside the curry spices, so I thought I’d try to play around with this marriage of flavors and textures.

If you LOVE curry, then you may want to be more heavy-handed in the spice addition; however, I feel that this is a middle-of-the-road introduction to curry and really hit the “happy place” with my taste buds and family.  Also, the dipping sauce, cooled, is almost the baby if a raita and a guacamole had sex in a cooler.  There is no yogurt; however, the avocado adds that creamy texture that you expect. 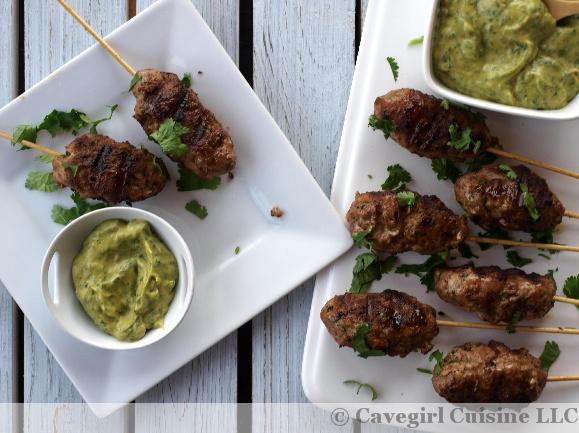