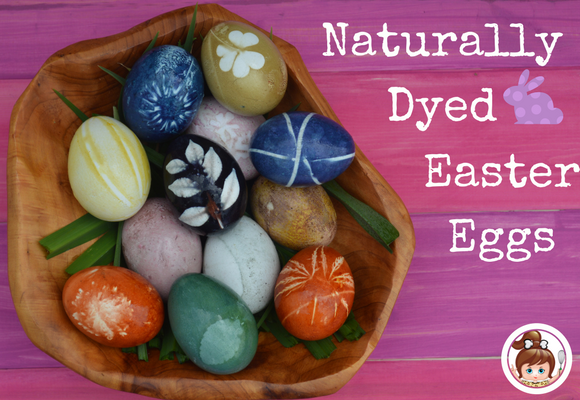 Sooo….Naturally Dyed Easter Eggs! I have been blogging for 5 years and each year I have mad intentions on giving this a shot. Well, I finally got around to it. And, well, it’s kind of a pain in the ass (because Paas has made egg decorating so easy), but I have to admit that I’d do it all over again!

BERRIES. OK, so I started doing my research. What I didn’t see was berries…why don’t folks use berries? So, one of my experiments was with a half of container of blueberries that I already had in my fridge…love! They are a natural stain! I will definitely add raspberries to my experiment next year! I took 3 cups of water with about 1/2 cup blueberries and brought it to a boil. I smooshed the blueberries with a spoon while cooking. I then strained the juice in a Mason Jar until liquid was cooled. The two blue eggs in the picture are from the blueberries and the dark blue is a mix of the blueberry and beet mixture.

SPINACH. Again, this was never brought up in my research, but I thought that it would be a winner, so I had to try it! I thought that it would be great for the color green. I added several handfuls to 3 cups of water. I brought it to a boil and then let simmer for about 15 minutes. It wasn’t green so I broke out my immersion blender and did my thing. I then strained it and put the juice in a Mason jar until liquid was cooled. If you look at the pic, the 3-leaf clover imprint was the spinach egg. I wasn’t impressed, so I probably wouldn’t do this one again. Plus, the spinach smell was kind of blech.

ONION SKINS. Ok, this was funny. Onion skins, whether yellow or red onions, give a dye (and I tried both). The orange/burnt eggs in the picture are from yellow onion skins. So, here’s where the story is funny. I asked my hubs to go up to the grocery store and pick up a few ingredients. I asked him to pick up a couple of yellow onions, but also the loose skins. You know how there are always extra skins all over the onion bin…well, I had him add all of those to the bag. He is such a trooper, because he did it after much funny bitching and head-shaking!

TEA. My research suggested to use Red Zinger tea. I could only find Raspberry Zinger tea so I picked that up. Bleh…wasn’t my favorite. If you look in the top right of the picture, at the very light pink egg, that was the result (and that set overnight)…so, not so deep in color. I will definitely try different teas in the future, but this one was a bust.

BEETS. OK, this is where things probably went astray. I put “beets” on the shopping list when my husband went up to the store. He brought home a can of beets where I wanted fresh beets. I think the fresh ones would have yielded a brighter color. If you look at the pink egg in the bottom left of the photo, that was was canned beet egg. Next year, I’m all over the fresh!

TURMERIC. I added about 3 tablespoons ground turmeric to 3 cups water before boiling and then cooling. In the future, I will probably add another 3 tablespoons…it needed more. If you look at the top left egg with stripes in the pic, that’s the turmeric…after dying overnight. I wanted a deeper yellow. Now, the bottom green egg was actually a mix of the turmeric mixture with a touch of the blueberry liquid. So, have fun and mix colors for sure!

For the imprints, just get creative with what is in your backyard. Take a pair of scissors and basket and hit the backyard. The starburst on the blue egg was a daffodil yellow flower. The stripes are chives that I wrapped around the eggs. The rest are just other leaves and clovers that were in my backyard.

How do I do it?! So, you’ll need segments of pantyhose to achieve the imprints. Most of my reading suggested using twist ties to hold the hose. I didn’t have any, so I used my youngest daughter’s small rubber bands from her braces (shhhh…don’t tell her). Use whatever you have! At first, I had a problem, because once I would start to cinch the hose, the flower or leaf would move. So, what I did, was to give it a little lick and them lightly press the natural element into the egg. It helped hold it into place until I could cinch the hose. As far as the pantyhose, the dye can go through it…it doesn’t hold up the dying process.