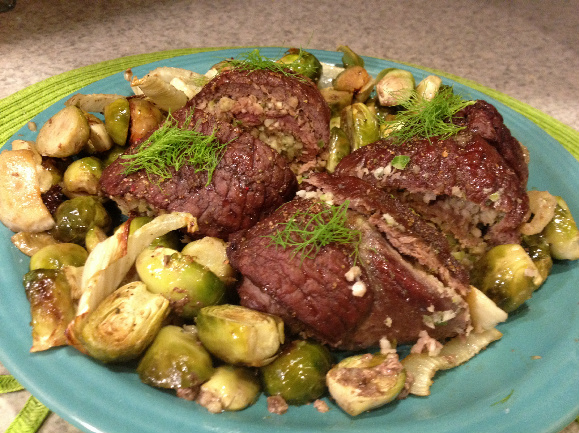 Add all filling ingredients to a food processor. Process until it forms a thick paste.

Pound out steaks using a mallet until they are about ½ inch thick.

Mix rosemary, sage and thyme together in a small bowl.

Spread half of the filling on each steak. Roll steaks up, using a few toothpicks to secure.

Place sirloin rolls in a large roasting pan and sprinkle with salt and pepper.

Toss Brussels sprouts and fennel slices in a large bowl with olive oil, salt and pepper.

Spread brussels sprouts and fennel slices around sirloin rolls in the roasting pan.

Roast for 35-45 minutes, until steak is cooked to desired level and vegetables begin to brown.